“How wonderful that we have met with a paradox. Now we have some hope of making progress.”
Niels Bohr

Thus spake the Danish Nobel prize winning physicist Niels Bohr. I was reminded of this quote on reading Alex Williams’ post on ReadWriteWeb The Paradox for Jive Software . The paradox he sees here is this, Jive he believes are a solutions orientated company and “Solutions oriented companies build custom configurations.”

As evidence, Williams cites Tim Bertrand over at the Drupal builders Acquia. Jive, Bertrand reckons, are playing a time-old game of building highly customised solutions, that not only cost the client a lot of money themselves, but also cost even more every time a new release is made: “Proprietary Social Business Software and Its Dirty Little Secrets” .

I don’t buy this argument as it goes completely against my own experience with Jive. They have a well developed Professional Services wing, but they’re not exactly keen on producing customisations. For sure, Jive will make customisations if requested but as they publicly stated at a Jive customer event in London last year, they do not see this as their core business. Their business they said was selling software, not to produce bespoke solutions. As this market is worth a potential $100BN a year, there might well be some mileage in this approach.

No even if a quarter of this size, this market is still pretty huge and the question remains on how customers’ needs are going to be met – is it best met with Open Source solutions such as Drupal (or my own personal favourite for small business solutions, WordPress); ‘best of breed’ vendors such as Jive; or the architecture behemoths such as IBM’s Connections or Microsoft Sharepoint?

The answer of course is ‘it depends’ and each of these solutions can and do meet customer needs to great effect. How they do this points to a bigger paradox than the one facing Jive and one that impacts all players. This paradox is this: how do you achieve standardisation and security and still provide agility and customisation? 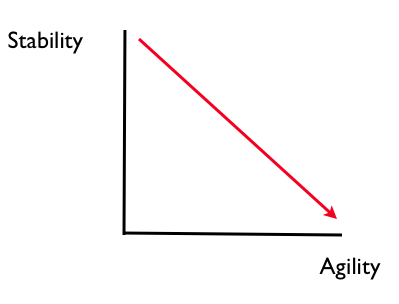 The answer to this paradox is quite possibly revealed when we look at the pace or Social Layering model of an IT architecture. See Lee Bryant’s Social layering can help bring IT and the business together and my On Pace and Panarchy. To reiterate, this model posits a slower changing and tightly controlled IT foundational architecture – the ‘transaction layer’ and a more quickly changing and less regulated social or ‘interaction layer’.

Such a model points to the way that standardisation and customisation can coexist as happy bedfellows. The foundational transaction layer provides the economy of scale and security needed for the core business operations. The interaction layer supports the winning edge of people driven innovation and collaboration needed for the modern social business.

What strikes me is that this model is one that we can actually see mirrored in some of the vendors mentioned above. SharePoint for example provides the potentially corporation wide architecture, but can happily coexist with a social layer provided by Yammer, Newsgator and the like. Perhaps at the other end of the scale we see this at a micro level with WordPress and its legion of plugins. The most interesting model is seen with Jive however.

Jive sits in the middle – there’s a core product that does the job pretty well indeed, at least according to Gartner and Forrester. It also can connect up to SharePoint and socialise a Microsoft architecture. The really interesting aspect of Jive is coming out in the imminent release of Jive 5.

What Jive 5 promises, is a core product, a standardisation, with the ability to create customisation via bespoke applications, named not surprisingly Jive Apps. Using OpenSocial these adhere to global standards and great flexibility. They can be built in-house, bought from vendors selling them as commercial apps or built by specialist agencies as part of a social business design. I like this approach as it combines stability with agility – it solves at least potentially, the paradox of how to customise without getting locked into the endless ‘vicious’ loop Bertrand speaks about.

Next blog will feature another physicist, Einstein, when I’ll look at how to make things simpler…;-)

8 replies on “The Social Business paradox”

Hi there. I think that somewhere in your analysis you have left out Drupal? You’ve got it correct that Sharepoint is at one end of the spectrum and WordPress is at the other – well done, but for a platform that powers nearly 2% of the web – I think Drupal deserves some attention here….

Next – I’m not taking shots at Jive based upon a personal preference or without facts. These are statements, verbatim – from very large Jive shops. I’m not sure what type of projects you have implemented – but these large (“Seven and Eight figure”) implementations that TonyZ claims of on TechCrunch – are in no way, 100% software licenses. They are customized versions of the platform, no matter how you look at it. What these same “seven and eight figure” customers claim – is that it is very difficult to customize, and therefore innovate on top of Jive. My facts are from direct conversations with these customers who are currently in the process of migrating to our Drupal Commons, open source product.

The other point I think you are missing is that Jive is a platform for only one purpose – social business communities, internally or externally. It is not a CMS (in fact one complaint is that managing content within Jive is difficult) or a platform in any way for building anything outside of what it is intended for. The reason why Drupal is winning is that it is a multi-purpose social web platform. We see organizations that are implementing a platform for their .COM site, another for their microsites, another for their Collaboration/Community or “Social” site (s), another for their blog, etc etc – as getting it WRONG. As @Dries states – it’s currently a mess, see — http://buytaert.net/acquia-product-strategy-and-vision.

Drupal, as a platform, – meets all of these use cases – the World Economic Forum uses Drupal for their Community site, the Whitehouse runs Whitehouse.gov on Drupal, Examiner.com runs thousands of hyper local blogs on Drupal, Al Jazeera runs their realtime community/blog on Drupal, P&G runs product microsites on Drupal, etc.

We believe that open source will continue to fundamentally change the software business. App Store or “Apps Marketplace”? Visit Drupal.org – instead of paying $50,000 to develop a video plug-in module for your website or Social Business community – there are 7 of them available for free. There are 7,000 available modules built by the community. Innovation? Typically, when any breakthrough technology becomes available for public usage – the Drupal community creates an integration module with that technology within days/weeks. With most enterprise software vendors “it’s on the roadmap.” Ecosystem? There are literally *thousands* of solution providers ranging from the largest to sole proprietors delivering solutions on Drupal that integrate with major enterprise systems ranging from SAP to Alfresco to Omniture to Salesforce.com, etc. Licensing fees? None. Commercial grade products/support? RedHat has made an extremely successful business model around providing enterprise grade support & products for Linux – and we’re doing the same for Drupal. In many cases, open source is at absolutely no disadvantage when it comes to commercial grade reliability, security, scalability, etc – as compared to its proprietary counterparts, even those of very large scale (MSFT, ORCL, etc.).

I guess this comes down here to the basic question of whether Drupal adequately squares the circle of agility vs stability in the Enterprise (not a space that WordPress is playing in just quite yet), in a cost-effective way. That then opens up all sorts of extra questions about why not Alfresco, or Ruby on Rails, or others, that I’ll maybe try and answer in a future post.
I’m not that interested in the technology solution as religion though – customers require solutions based on their needs, which might be Drupal or it might be SharePoint, Alfresco or Jive. Ultimately the customer decides what’s best for them.

Agility – 2% of the Web, microsites to community sites to .GOV sites to .COM sites to large intranets

Alfresco & Drupal are complimentary technologies, not competing technologies. John Newton was in our office just a couple of months ago discussing go to market use cases.

Rails – Rails is a framework for building applications, not enterprise class websites IMHO. It is the reason why Springsource built their website on Drupal versus building on their *own* framework – they would have had to write every component in Spring versus configuration in Drupal.

I do – however, agree 100% that there are “proper” use cases for each technology. I’m sure that (Name your technology) provides a better fit than others for the particular use case – however, we are definitely seeing the broadest array of use cases over here in Drupal land….

Have a nice weekend.

I can see mileage in Alfresco + Drupal, but then Alfresco + Jive too, though I don’t, yet, have 1st hand on that. Seems to me that all are great products, used in partnership, they combine their strengths. I’ll return to the Ruby question -but are you saying Drupal is only good for building websites or small intranets unless it’s used with something like Alfresco?

No – Drupal is used for many intranets – ie: a major telco with 125,000 users. In this case, we used Web Services to integrate to their internal document management system – Documentum. Drupal has very strong, open API’s (ie: open social has been supported for a long time, RDF/RDFa supported in D7, Web Services are the defacto integration point). For a customer building a new Intranet or looking to migrate away from proprietary document management, Alfresco is a great fit. For the same reason Jive partnered with Alfresco – we do the same – very strong document & records management capabilities.

We’ll be releasing some interesting videos shortly around integrating Drupal Commons (competitive distribution to Jive) with enterprise systems such as SAP.

Yep, I asked a question on the Acquia strategy link you posted about whether you could share some enterprise case studies- it’s not been published yet.

We are currently trying to integrate the open source drupal with a proprietary Social Networking platform. Since one is php based and the Social Networking software is .NET, it is more difficult with the integration process.