One of the issues we best not to forget, is the simple fact that social business benchmarking is by necessity, always done against a fluid and changing backdrop. The benchmark applied against a mature social business community for example, will be different to that applied to a more recently formed one. In addition, the benchmarks themselves, inevitably drawn from the aggregation of industry best-practice in terms of both data and the stories we tell about our communities will themselves change over time. Used correctly, this information when applied back to the social business projects will change them, hopefully for the better, and thus raise the bar on what we all want to achieve.

The 90–9–1 principle does not apply to social business

Equally important is the fact that while social business might be driven by the wider consumer driven social web, these are very different entities. A social network at work is very different in fundamental ways to a universally accessible consumer network. The former is by its nature private and closed, at least to some extent, one has to be an employee to access for example, the numbers are finite and their limits easily seen. For this reason alone, we must abandon the use of the 1% rule for employee based engagement measures – the 90–9–1 principle does not apply to social business.

We can see this more clearly when we look at the application of social business benchmarks that I discussed in a previous post Benchmarking the Social Business. To recap, of our finite possible community, ( i.e. the number of people who can at least in theory log into our social business platform, most often the total people in AD), 90% of these should have logged in at least once. Of these, 50% should be Active Users, having logged in and viewed content in the last 30 days. And further, of these, no less than three quarters should be what Jive call Contributing Users, that is, those generating original content in the previous 30 days. We can easily represent this in a fictional company of 100,000 employees. Some 90K of these should have logged in at least once, half of these, i.e, 45K should be Active and three-quarters of these should, at least by Jive Software’s benchmarks, be Contributing Users. That figure comes out at around a third of all users, some 33,750 employees. Taken as a whole we get this table:

Thus, rather than 1% as creators of original content, we get 33% of all employees generating new content – starting discussion threads, posting blogs, creating documents etc (though not including status updates). This correlates more closely to Pareto than the 1% rule.

Two salient points. Firstly, Active Users includes Contributing ones. This is partly because of the way Jive’s Community Manager Reports works, but it also it makes more sense that way. I will in a future post try and extrapolate this out in more detail. 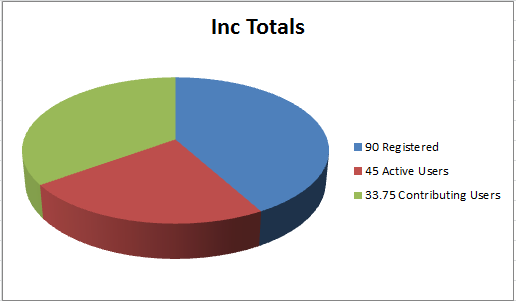 The second point is more prosaic – even if it’s agreed that 1% of employees actually using these tools for primary generation of content, this is in industry terms still a very high figure. These are the sort of figures we can expect to see in a very mature social business platform, in practice it takes a lot of hard-work and time to get these sorts of results.

For this reason, I believe we need a series of benchmarks or different ratios to correlate with the maturity- if a community is a year old and has not enjoyed cross-company C-Level push it ideally needs (and this is not uncommon, particularly in politically tense terrains), we might well have a situation where only a minority have ever logged in and of these only a minority again are generating new content. Thus a freshly released platform we are more likely to see a roll-out pattern, that while more closely relates to the 1% rule, is nonetheless a signal of immaturity and the need for fuller engagement. I will explore this in more detail in future posts.