Reliable sources, says Shel Israel, have it that one reason Oracle wanted Sun, was for their social networking capabilities. Mike Gotta lists these out, including SunSpace, their Facebook for the Enterprise:

ZDNET look toward the Data Center and see this as both entering the fray with combined gusto. It also brings together tech:

The technical side of this Oracle buy Sun deal also is notable. Oracle’s stack of IT stuff now includes:

Will it all function together? Are they going to market a SunSpace Beehive? What will happen to MySQL and Open Office?

Let’s hope Dries Buytaert is right too and MS Access is in the frame: 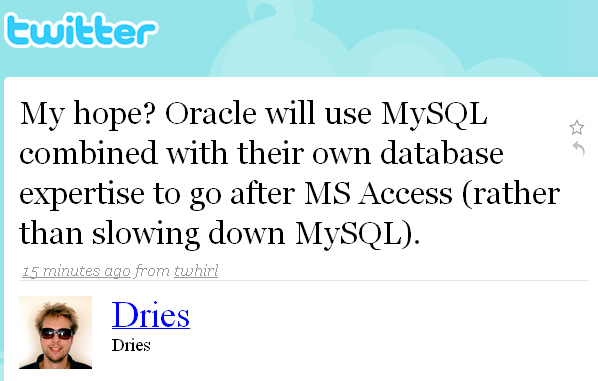 Will it all work out? Technosailor Aaron Brazell has no doubts, with this Blip to the new union: