Just been rereading the McKinsey Quarterley from July: Building the Web 2.0 Enterprise Global Survey. There’s quite a striking finding in the survey data that I missed first time round. McKinsey look at How Companies bring in 2.0 and then, and here’s the twist, the level of satisfaction of what’s been adopted. 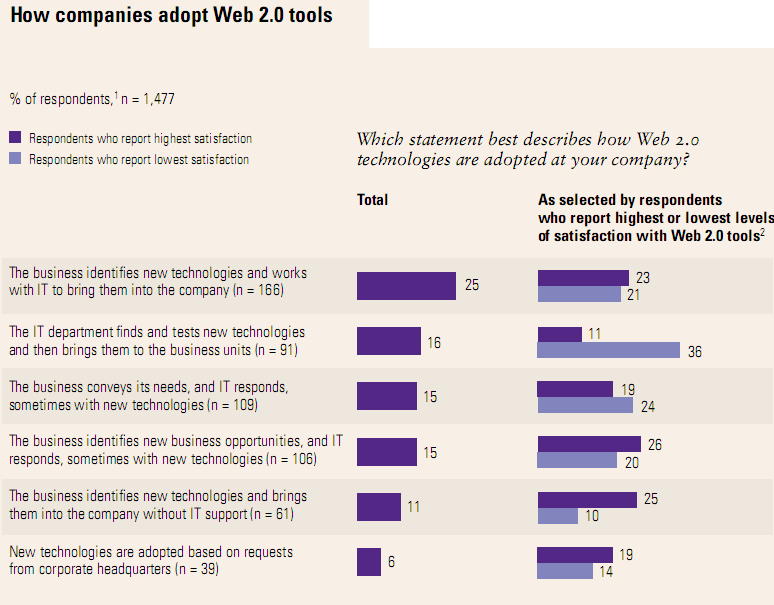 What it shows is that most 2.0 is brought in by IT, and that has the lowest level of satisfaction amongst the user base.  but every time the Business identifies new technologies, the satisfaction is higher.

Why is that I wonder? Is it the actual technologies themselves, the way they’re adopted, the way they approach business issues, challenges or opportunities? Or maybe all of these plus others…

Be interesting to cross reference this against specific patterns of deployment and of course on the technologies themselves. I wonder where SharePoint would figure as a social media tool compared to the more overtly social tools. especially as bearing in mind the fact that the survey puts Knowledge Management as the number 1 use of social networks in the enterprise.

And perhaps one of the most suprising and refreshing findings was the way that an increasing number are seeing the transformative potential of enterprise social networks:

“As web 2.0 gains traction, it could transform the ways companies organize and manage themselves, leading to what some have dubbed Enterprise 2.0.”

This, say the most positive proponents surveyed by McKinsey is leading to a distince competitive advantage and degrees of departmental and possible business transformation. Of note, the most positive here are once again those in business rather than IT managed roll-outs.

And regardless of satisfied or not, all companies said they were going to spend more on 2.0 tools. This, at The Parallax View,  is welcome news 😉

Over in the FASTForward blog Bill Ives posted a neat and useful review of Forrester’s recent report on 2.0 uptake: Forrester TechRadar For Vendor Strategists: Enterprise Web 2.0 – How Product Strategists Should Approach A Maturing Web 2.0 Market, Q4 2008 by by G. Oliver Young et al. The report is aimed, as it says on the box, at vendor strategists and I thought it made interesting reading in light of the current economic climate.

My first thoughts on reading it, were if we’re stuck in the development of 2.0, but the more I think about this, the more I think the opposite. One of the key questions I keep seeing asked is if the Crunch will hinder or help the uptake of 2.0. Bill rightly distinguishes between Enterprise and Web 2.0 – but here for reasons of laziness conciseness I’ll mostly use them interchangeably. However, I am only talking about 2.0 use in the Enterprise and not so much in the domestic or play environment, even if that inevitable leaks into any work space. So back to the question, is 2.0 being Crunched?

If we look at the report it tells us that they looked at 11 2.0 technologies and found the following (I’ll paste from Bill here):

Now what’s interesting here is that they’re looking at each technology one by one. Bill would move a couple of categories and I think we could all tweak it here or there. The real issue he says, is this:

“… my major concern is looking at these tools in isolation.”

Bill is absolutely right here and I think this highlights the Achilles’s Heel of the report and why some of the vendor strategists should listen to the alarm bells.

To succeed in an Enterprise environment 2.0 needs to be part of what Forrester dub the “2.0 ecosystem”. It’s no good simply adding a blog and a wiki to an existing corporate environment and expecting it to work. This is like trying to create another type of ecosystem and believing it will work, simply by introducing 2 new applications/organisms into it and expecting them not only to flourish, but to sustain and potentially transform the system too. (At the risk of ending up in Pseuds Corner I reckon that the metaphor of ecosystem in any Enterprise or non biological space is always a poor one and one ripe for Deconstruction.)

OK then, so unlike Web 2.0 tools, Enterprise 2.0 applications work best as an aggregation, as a social network of communication tools within the Enterprise being used by a base of employees, rather than as a set of standalone tools that may or may not be used. This can be best summed up by looking at what happens when say a Wiki is introduced and most people look at it as either so cool, or a complete waste of space, and both primarily for the same reason – it sits as an oddity within the flat plane of a developed 1.0 terrain. Make it seamless so that it doesn’t look like a Wiki but presents an environment that provides a range of wiki-type functions such as easy self-editing, blogs, self posting of desktop filmed video and all backed up by RSS then we’re looking at what becomes ubiquitous rather than an aberration. The transformational and productivity enhancing aspect of this can be seen if we look at say 2 departments, one using this sort of environment and one not and where one can post content immediately and one has to use slow and expensive channels to post content. One has definite and visible productivity advantages and the other only too real costs and delays.

The question for me here, is how do we achieve this and transform working patterns, how does the dragging Achilles Heel sprint into 2.0 business acceleration and transformation? For the record, I think that not only can this can be done, but that we’re seeing this being done in some organisations. The potential productivity gains here are enormous. And the rub is the word potential – currently no one can point to an existing transformation and provide the hard data. What public data we have is often piecemeal, anecdotal and fragmentary. Until this situation changes, rolling out 2.0 in an Enterprise will be incredibly difficult. Sure there will be plenty of instances of companies rolling out this or that 2.0 application, but with few exceptions most business leaders and their operational and technology teams will be very reluctant to take the risks involved. We’re not quite at the stage where one can say: “No one has ever lost their job by buying 2.0.”

So let’s recap, I’ve said that the vendors might be worried and that cracking the 2.0 nut is not going to be done with a ‘tap here’ and a ‘tap there’ from a selection of standalone hammers. For a long while the outlook was a lot rosier than at present and plenty of studies recommended (and could point to case studies of)  the bit by bit approach to rollouts of 2.0. In the current economic climate this is not going to work – it’s either a luxury or both the risks and the costs are too high, thus – ‘IT won’t support it and the Business won’t pay for it…’

But, and it’s a big but, if we look at the bigger picture and more longer-term view, then these arguments start go increasingly out of focus.  And this is where Forrester to my mind misses the point too. Forrester states that:

None of the technologies we examined are likely to be replaced in a wholesale manner in the next five to 10 years.

The productivity gains offered by 2.0 are such that they’ll all be replaced in the next 5 years. This sounds like a contradiction and it probably is- for sure the tools such as blogs for e.g, will still exist and many instances of current usages will remain, but we won’t see these technologies as isolated instances. Polishing my crystal ball and looking through a scanner darkly, I think we’ll see at first more and more instance of the Pownces of this world being eaten up by their larger competitors. This will leave a clearer battleground with fewer competing vendors. It’s then I think, that we’re going to see the real fun begin as the competition shifts from the technologies and the vendors; to the networks, the wares and the platforms. This is going to completely transform the game (and the vendors), mashing up the mashups and reallocating collaboration into areas we can only begin to imagine. The big frenemies who currently own the networks the softwares and the socialities; will have to simultaneously deal not only with competition and collaboration (as some do now), but that the fact to have survived in this brave new world will have meant inventing completely new social technologies that will further transform the way these businesses do business. It’s these ‘known unknowns‘ that intrigue me, all we can say with any certainty is that they’ll transform 2.0 in unforeseen ways, much like SMS did. The difference here will be scale, development and innovation- it’s 2.0 Jim, but not as we know it…

So, if I was a vendor what would I do? I’d hope to survive, hope to get through (or be bought-up at a retirement buyout) and I’d continue to innovate. More than anything I’d ‘widgetise’ as much as I could and make sure that what I supply could be both moved, slotted into and transformed by the next waves of change. One thing for sure… is it’s going to be different.

n.b This Blog expresses entirely my own personal opinions and has no affiliation with any other bodies or organisations that I am a member of.