Looks like the 1st full-blown folk devil 2.0 is shaping up in the form of China’s ’50 cent Army’ (The Guardian) or ’50 cent Party’ (BBC); because as Datamation proclaims the Chinese will wreck Web 2.0. What’s happening here is that the president and apparatchiks of the Chinese Communist Party (CPP) have called on their loyal acolytes to spread the word social media style, calling on:

comrades of good ideological and political character, high capability and familiarity with the Internet to form teams of Web commentators … who can employ methods and language Web users can accept to actively guide online public opinion

For Mike Elgan at Damnation Datamation, this means the end of the world wide web as we know it. The Chinese 50 cent army he says will work like a massive astroturf* campaign Digging up the ratings here and thumbing them down at will.

Over the long term, the existence of China’s 50 Cent Army erodes the value of the Web 2.0, which is based entirely on the actions of users. If half those users are working for the CCP, then the results of user actions are compromised. Nobody can trust it.

This, on this occasion I’m glad to say, is a panic. It won’t happen and it won’t mean the end of free-speech or anonymity on the web as Elgan fears. 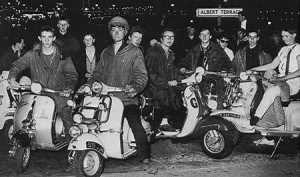 It’s a classic case of what Stanley Cohen dubbed a ‘folk devil’ in his 1972 classic “Folk Devils and Moral Panics: Creation of Mods and Rockers“. The 50 Cent Army in this sense is akin to the Facebook Republican Army, who led a brief media panic, wrecking teenage parties. Even when it turned out to be some lads having a laugh at the British tabloids – they didn’t even exist, the media continued to drive the story forward.

Whether or not there’s 300,000 Chinese Web 2.0 cadets undermining the interweb is a moot point, but even if there were, we should not really worry. For one, any human would be as easily able to spot them as an ad-bot on a site, and secondly, if they did start to skew the data on YouTube, Digg etc, then I’m, sure that some new algorithms would soon put in to stop to it.

In the meantime, in the words of Lance-Corporal Jones of the enjoyably fictional Dad’s Army, Don’t Panic, Don’t Panic…

* Astroturf – not to be confused with what The Chiswick Gardener does!