Will SharePoint 2010 run ok on your legacy environment of Office 2003/2007 and IE6? I’ve been doing some research on this question and here’s my findings on what SharePoint 2010 works with in terms of: legacy browsers, versions of Office and Windows. My focus, as ever, is on the social software side of the tool.

What I’ve found out so far is that the only real show-stopper is Internet Explorer 6 (IE6). Hopefully 2010 could mark the death knell of this horrid browser. But before any of us carp too much about corporations still using it, many big businesses still have to, as they have other processes and applications integrated into it. Put simply they can’t remove it without losing some internal web-based apps.

But back to the main question, this is the overview of what I found that it works with (or not): 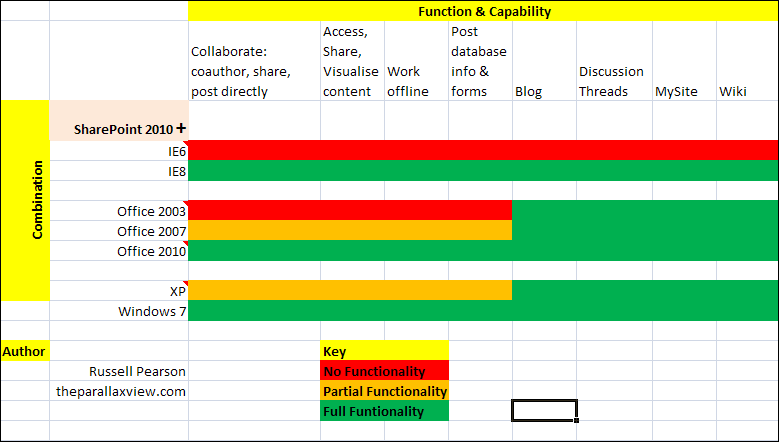 To explain – to get tip top 100% performance you need SP2010 running on Windows 7 and with IE8 as the browser. If you have Office 2007 running you get most functionality, but on Office 2003 the core SharePoint 2010 functions won’t work.

However, SharePoint 2010’s core social functions should work ok as they’re all browser based. And what’s more you can use other browsers apart from IE such as Firefox.

As for the $100 million question of whether SharePoint 2010 will deliver all of your organisational’s Enterprise 2.0 needs, the answer is a quiet ‘no’. It doesn’t support microblogging for example but then Microsoft don’t expect it to meet every conceivable need. But does it provide nearly all you’ll ever need, the answer so far is a reserved ‘yes’.

This reservation is based on usablity and sociality plus complexity. In this I still believe that SP 2010 may still well need a social layer on top -e.g., Jive (the one I’ve in-depth experience of using), Newsgator (see the recent webinars with Deloitte) or Socialcast. What’s more, as we move into the rest of the year, on to 2011, 2012 & 2013, (and SharePoint 2010 don’t forget will still be the 2010 version, it runs on a 3 year upgrade cycle) none of these companies are going to sit around and do nothing. So expect some really exciting deveopments and releases from them in the near future.

Back to today however, a colleague at work has kindly set me up with a sandbox on the Sharepoint 2010 Proof of Concept site so I will go and made some sand castles…and come back later with more in-depth findings.

Download the SharePoint 2010 comparison worksheet with notes & URLs from Microsoft.
Thanks to Microsoft for helping with requested info and for a great visit to their HQ at Reading.

Business Productivity at Its Best_Whitepaper

Rusell – an excellent bit of research. Thanks for the info. Indeed
many corporations are stuck in the past because of integration
issues with the newer versions of IE. I have had first hand
experience of this, and it comes down to whether the cost of
getting all the applications upgraded/modified so that they work
with IE8 really worth the expense when compared to any extra value
that the later version of browser will offer. (That is, will the
business work better, more efficiently, etc with a new version of
the browser). Thanks again Mark J Owen
http:\\markjowen.wordpress.com