Last night I was struck by a Joycean ‘ideal insomnia‘ and rather than unravelling Finnegans Wake I spent several hours rethinking how to configure a way of understanding contemporary communications. There are several strands of ideas I want to tackle in the near future and in doing so I’m going to try at least to treat this blog in perhaps more detailed seriousness than I may have in the past.

What I’m re-imagining is the impact of what I see as a set of interrelated trends. The first is the increasing permeability of the corporation in terms of its ‘inside and outness’. What started as a barrier has now become more an osmotic membrane: a firewall that prevented communication across it would be useless, but it now needs to cater for an accelerating level of collaborational and communicative activities from both employees working within, without and across its boundaries; partners; customers and consumers and even competitors’ the so-called ‘frenemy’ complex.

This tendency will have and indeed is having a big impact on how communications is organised – Internal Comms + PR and Corp Comms. It also impacts and interrogates the Brand, especially if a brand is seen as an entity with resonance and meaning inside and outside the company. In this sense internal communications can be seen as an articulation of the brand within and to the company itself. It is an internal dialogue, or at least becoming more of one as collaborative and social technologies arrive and evolve as part of the office landscape.

I jump ahead of myself, let me articulate how we are now as so: 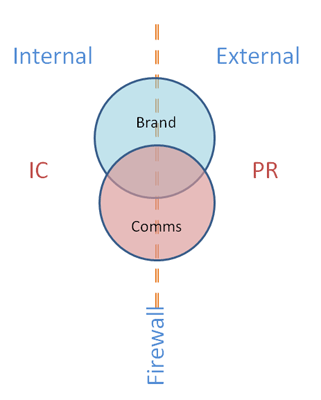 The next area to tackle is the growing confluence of internal communications, the intranet and with the arrival of the collaborative technologies, the 2.0 experience. In this, the social software will transform both the intranet itself – we can see this happening already, but also the roles of the intranet manager and the internal communicator. If we represent this as 3 circles of activity or space we get this: 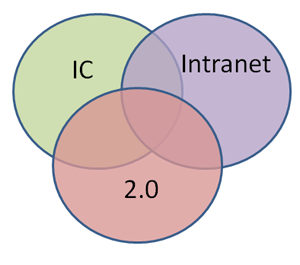 We might also start to trace further levels of complexity here by adding the division / connectedness with the intranet and the .com pointing to an ultimate fusion or hybridity between them. Suffice to point out one aspect here in all this. Namely if we overlay the two diagrams we start to get a sense of a 3 dimensional picture that is reforming itself into something quite new. We haven’t seen this before. We haven’t seen the roles it creates either.

Where these new roles and technologies will appear will be in the areas where the spheres overlap, where comms becomes a collaborative intranet that encompasses all parties engaged in the activity, both within and without. This is the end and start of something new. Maybe it needs a wake, or what Joyce dubbed the ‘funferal’…