Borsalino is a film I’ve had on my waiting list for quite some time and now the hats of the eponymous company are making their way back into fashion. Next fashion venture will be to track down a Borsalino Ivy cap in London. 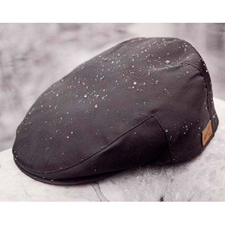 For what caps are all about see this excellent article “Wear a Flat Cap, But Wear It Right“

Two films seen recently have kept me thinking, for more than usual.  The first was Blade Runner (Final Cut) on the giant BFI IMAX screen at the back of Waterloo. This was something of a visual treat, even though the seat was a little bit too much of a crick-in-the-neck type affair. Rough notes, thoughts out of season therefore.

Blade Runner is a film I’ve seen more than a few times and even lectured on in a different life; taking up the themes of the Dystopian City and of Monstrous Motherhood for my bemused students. On this occasion however, I just enjoyed the Spectacle and mused again on the theme of eyes that permeates the narrative. My fellow W4 Film Club viewer took a different view and commented afterwards on the unrelenting violence of the thang. I must admit I’d forgotten just how violent it is but wasn’t sure the demise of Dr. Eldon Tyrell was as gory as I’d seen it before. But hey ho, ‘final cut’ and all that.

The second of the movies seen this last week attracted a fair share of the Chattering Classes’ attention –’ The Baader Meinhof Complex’. For example, the Sunday Times journo Brian Appleyard likens the Red Army Faction (or RAF, the gang’s own self-descriptor) to the Nazis, even (mis)quoting Bertie Brecht’s dictum on Hitler that “The bitch that bore Baader-Meinhof is in heat again.” Elsewhere, from a somewhat more radical position Rob Killickdubs the gang ‘hippies’ and notes that in the film at least, the group’s only contact with the working class they were supposed to be fighting for, is with those injured in their botched Springer Publishing bombing.

I’m not going to dwell on history here, nor will I succumb to Theory. What I find most interesting is the simularities between the Blade Runner replicants and the RAF, or rather between their hunters. In each, both ‘outlaws’ are hunted down one by one: in Complex we see their photographs crossed out as each is captured  or killed, in Blade Runner replicant leader Roy Batty counts them down for us. Their hunter, Deckard, most singlarly singled out in the Final Cut as a replicant himself with the seeming dream inplants of unicorns, has his counterpart in Complex with Secret Police Chief Horst Herold (played by Bruno Ganz, most known here in the UK for his portrayal of Hitler in ‘Downfall/Der Untergang‘).

Herold empathises with his prey the more to understand them and thus to catch them. His team create a surveillance state using then state-of-the-art computing, now of course, less data than can be held in a mobile. The density of the data cross-referenced to the society is neverless suffcient to dragnet his targets. For Deckard, fantastical photograpy is used to produce an image of his target and a bio-engineered snake-scale from a synthetic snake, provides details of its inventor and thus tracks the customer, Zhora.

Both sets of prey are defined by their illegality – the replicants illegal for simply being on Earth, the RAF for their terrorism and their allegiance. Looking back the RAF seem perhaps the most fantastical, the most alien of the two. And yet and yet, for so many writers like Appleyard and others there’s a ringing fear that what they represent will return. Unwelcome visitors perhaps from an offworld they’d rather forget.

Time to resume blogging again, this time under my own name. The theme, like my previous blogs and engagements is Communication Theory and Practice; Social Media and 2.0; Film and Film Theory; Critical Theory; Fashion and Fashionistas; Psychologies; and anything else that happens to amuse me at the time.